When was the last time you had a conversation about Sexually Transmitted Disease (STD’s)? Not something that most of us find easy to talk about. Studies show this is due to the stigma attached to contacting an STD. According to a study conducted in 2015, over 84% of people questioned about contracting an STD believed if they contracted an STD, people would think they had “bad morals”.  In the same study more than 86% believed people would be “disgusted by them” if they contracted an STD.

STD’s ARE MORE COMMON THAN YOU THINK!

The CDC estimates that there are about 20 million new sexually transmitted disease cases each year. Some studies estimate that up to one in two sexually active people will contract an STD before they’re 25.  But STD’s, make no mistake affects all ages and races.  In Bexar County alone according to the DSHS, there were a reported 4,493 new cases of HIV diagnosis.  Although it can affect all ages the age group most affected are as follows. Ages 20 – 24 with 815 new cases, 25 – 29 with 989 new cases, 30 – 24 with 707 new cases and 45 and older with 948 new cases. Of those cases by race, Hispanic had 1’745 new cases, Blacks with 1’623. new cases and Whites with 937 new reported cases.  According to the Center for Disease Control, there are many more cases that have not yet been reported.

Chlamydia is a common STD that can infect both men and women. It can cause serious, permanent damage to a woman’s reproductive system. This can make it difficult or impossible for her to get pregnant later on. Chlamydia can also cause a potentially fatal ectopic pregnancy (pregnancy that occurs outside the womb)

How is chlamydia spread?

If you’ve had chlamydia and were treated in the past, you can still get infected again. This can happen if you have unprotected sex with someone who has chlamydia.

How can I reduce my risk of getting chlamydia?

If you are sexually active, you can do the following things to lower your chances of getting chlamydia:

Gonorrhea is a sexually transmitted disease (STD) that can infect both men and women. It can cause infections in the genitals, rectum, and throat. It is a very common infection, especially among young people ages 15-24 years.

How is gonorrhea spread?

Am I at risk for gonorrhea?

Syphilis is a sexually transmitted infection that can cause serious health problems if it is not treated. Syphilis is divided into stages (primary, secondary, latent, and tertiary). There are different signs and symptoms associated with each stage.

How is syphilis spread?

Without treatment, syphilis can spread to the brain and nervous system (neurosyphilis) or to the eye (ocular syphilis). This can happen during any of the stages.

What is Genital Herpes?

What is oral herpes?

Oral herpes is usually caused by HSV-1 and can result in cold sores or fever blisters on or around the mouth. However, most people do not have any symptoms. Most people with oral herpes were infected during childhood or young adulthood from non-sexual contact with saliva.

Is there a link between genital herpes and oral herpes?

How is genital herpes spread?

If you do not have herpes, you can get infected if you come into contact with the herpes virus in:

You will not get herpes from toilet seats, bedding, or swimming pools, or from touching objects around you such as silverware, soap, or towels. If you have additional questions about how herpes is spread, consider discussing your concerns with a healthcare provider.

Can herpes be cured?

There is no cure for herpes. However, there are medicines that can prevent or shorten outbreaks. One of these anti-herpes medicines can be taken daily and makes it less likely that you will pass the infection on to your sex partner(s). Learn more about Genital Herpes.

Frequent testing and swift testing are the best ways to avoid long-term complications as a result of STD’s (not to mention unknowingly spreading them). 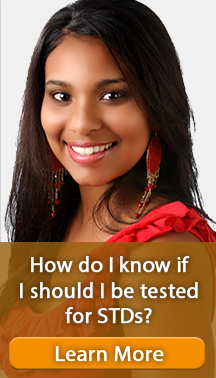 In the case of bacterial STD’s like chlamydia, gonorrhea, and syphilis, simple antibiotics can easily cure the infection. But if left untreated, these infections can spread to and damage other parts of the body. Always have protected sex unless you are in a  long-term mutually monogamous relationship with a partner who has been tested and has negative STD test results. Use latex condoms to help prevent any STD infections.

I opened Shades of Love in 1999 as the first "adult boutique" in San Antonio. As a service oriented person, (my background is in social work, school truancy officer, school teacher and children protective services) I now have the opportunity to help people with their most intimate relationships. I enjoy my profession and strive to keep myself educated by immersing myself in reading and attending seminars . I would like to share some of my knowledge and experience with you in the hope that you find the information helpful.

Toys For Targeting The Clitoris
February 28, 2022

Focus On All Inclusive Kink Gear
January 18, 2022
Recent Posts
Categories
Connect With Us:
Our Store

Get In Touch With Us Today!
Go to Top